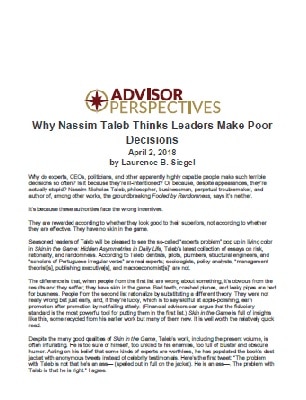 Why do experts, CEOs, politicians, and other apparently highly capable people make such terrible decisions so often? Is it because they’re ill-intentioned? Or because, despite appearances, they’re actually stupid? Nassim Nicholas Taleb, philosopher, businessman, perpetual troublemaker, and author of, among other works, the groundbreaking Fooled by Randomness, says it’s neither.

It’s because these authorities face the wrong incentives.