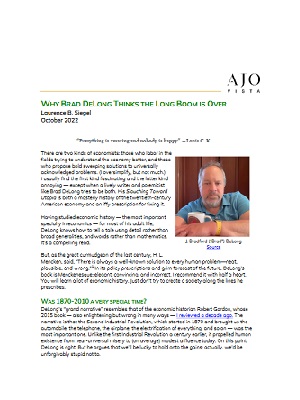 There are two kinds of economists: those who labor in the fields trying to understand the economy better, and those who propose bold sweeping solutions to universally acknowledged problems. (I oversimplify, but not much.) I usually find the first kind fascinating and the latter kind annoying — except when a lively writer and polemicist like Brad DeLong tries to be both. His Slouching Toward Utopia is both a masterly history of the twentieth-century American economy and an iffy prescription for fixing it.

Having studied economic history — the most important specialty in economics — for most of his adult life, DeLong knows how to tell a tale using detail rather than broad generalities, and words rather than mathematics. It’s a compelling read.

But, as the great curmudgeon of the last century, H. L. Mencken, said, “There is always a well-known solution to every human problem—neat, plausible, and wrong.” In its policy prescriptions and grim forecast of the future, DeLong’s book is Menckenesque: elegant, convincing, and incorrect. I recommend it with half a heart. You will learn a lot of economic history. Just don’t try to create a society along the lines he prescribes.