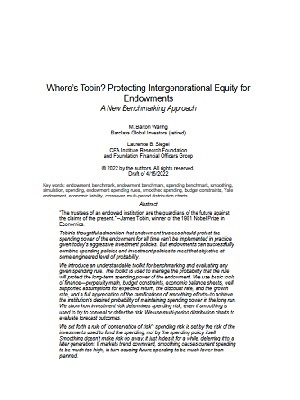 “The trustees of an endowed institution are the guardians of the future against the claims of the present.” –James Tobin, winner of the 1981 Nobel Prize in Economics.

We introduce an understandable toolkit for benchmarking and evaluating any given spending rule. The toolkit is used to manage the probability that the rule will protect the long-term spending power of the endowment. We use basic tools of finance—perpetuity math, budget constraints, economic balance sheets, well-supported assumptions for expected return, the discount rate, and the growth rate, and a full appreciation of the ramifications of smoothing efforts–to achieve the institution’s desired probability of maintaining spending power in the long run. We show how investment risk determines spending risk, even if smoothing is used to try to conceal or defer the risk. We use multi-period distribution charts to evaluate forecast outcomes.

We set forth a rule of “conservation of risk”: spending risk is set by the risk of the investments used to fund the spending, not by the spending policy itself. Smoothing doesn’t make risk go away; it just hides it for a while, deferring it to a later generation: If markets trend downward, smoothing causes current spending to be much too high, in turn causing future spending to be much lower than planned.