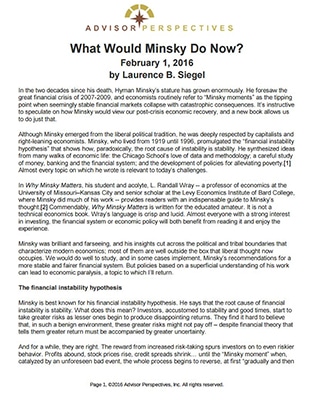 In the two decades since his death, Hyman Minsky’s stature has grown enormously. He foresaw the great financial crisis of 2007-2009, and economists routinely refer to “Minsky moments” as the tipping point when seemingly stable financial markets collapse with catastrophic consequences. It’s instructive to speculate on how Minsky would view our post-crisis economic recovery, and a new book allows us to do just that.

Although Minsky emerged from the liberal political tradition, he was deeply respected by capitalists and right-leaning economists. Minsky, who lived from 1919 until 1996, promulgated the “financial instability hypothesis” that shows how, paradoxically, the root cause of instability is stability. He synthesized ideas from many walks of economic life: the Chicago School’s love of data and methodology; a careful study of money, banking and the financial system; and the development of policies for alleviating poverty. Almost every topic on which he wrote is relevant to today’s challenges.