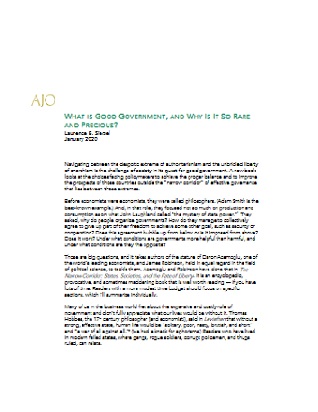 The letter Ethan Brodie of AJO sent to introduce my article:

This is heavy stuff.

Larry Siegel reviews The Narrow Corridor: States, Societies, and the Fate of Liberty by Daron Acemoglu and James Robinson. Larry warns at the start that the density of the book makes it “maddening.” Larry also notes that the book “provides an effective counterpoint to the bubbly of his own recent book, Fewer, Richer, Greener.

Navigating between the despotic extreme of authoritarianism and the unbridled liberty of anarchism is the challenge of society in its quest for good government. A new book looks at the choices facing policymakers to achieve the proper balance and to improve the prospects of those countries outside the “narrow corridor” of effective governance that lies between those extremes.

Before economists were economists, they were called philosophers. (Adam Smith is the best-known example.) And, in that role, they focused not so much on production and consumption as on what John Laughland called “the mystery of state power.” They asked, why do people organize governments? How do they manage to collectively agree to give up part of their freedom to achieve some other goal, such as security or cooperation? Does this agreement bubble up from below or is it imposed from above? Does it work? Under what conditions are governments more helpful than harmful, and under what conditions are they the opposite?

Those are big questions, and it takes authors of the stature of Daron Acemoglu, one of the world’s leading economists, and James Robinson, held in equal regard in the field of political science, to tackle them. Acemoglu and Robinson have done that in The Narrow Corridor: States, Societies, and the Fate of Liberty. It is an encyclopedic, provocative, and sometimes maddening book that is well worth reading — if you have lots of time. Readers with a more modest time budget should focus on specific sections, which I’ll summarize individually.