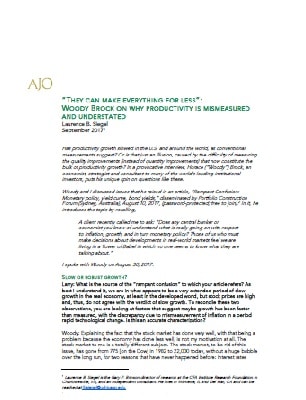 Has productivity growth slowed in the U.S. and around the world, as conventional measurements suggest? Or is that just an illusion, caused by the difficulty of measuring the quality improvements (instead of quantity improvements) that now constitute the bulk of productivity growth? In a provocative interview, Horace (“Woody”) Brock, an economist, strategist and consultant to many of the world’s leading institutional investors, puts his unique spin on questions like these.

Woody and I discussed issues that he raised in an article, “Rampant Confusion: Monetary policy, yield curve, bond yields,” disseminated by Portfolio Construction Forum (Sydney, Australia), August 10, 2017, (password-protected; free to join). In it, he introduces the topic by recalling,

A client recently called me to ask: “Does any central banker or
economist you know of understand what is really going on with respect to inflation, growth, and in turn monetary policy? Those of us who must make decisions about developments in real-world markets feel we are living in a Tower of Babel in which no one seems to know what they are talking about.”