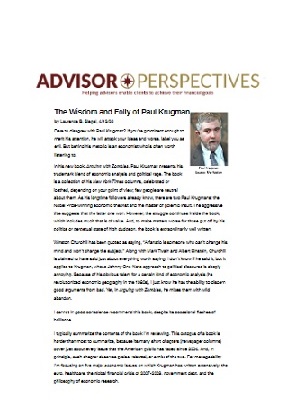 Dare to disagree with Paul Krugman? If you’re prominent enough to merit his attention, he will attack your ideas and worse, label you as evil. But behind his rhetoric is an economist who is often worth listening to.

In his new book, Arguing with Zombies, Paul Krugman presents his trademark blend of economic analysis and political rage. The book is a collection of his New York Times columns, celebrated or loathed, depending on your point of view; few people are neutral about them. As his longtime followers already know, there are two Paul Krugmans: the Nobel Prize-winning economic theorist and the master of polemic insult. The aggressive title suggests that the latter one won. However, the struggle continues inside the book, which includes much that is of value. And, to make matters worse for those put off by his politics or perpetual state of high dudgeon, the book is extraordinarily well written.

Winston Churchill has been quoted as saying, “A fanatic is someone who can’t change his mind and won’t change the subject.” Along with Mark Twain and Albert Einstein, Churchill is claimed to have said just about everything worth saying. I don’t know if he said it, but it applies to Krugman, whose Johnny One-Note approach to political discourse is deeply annoying. Because of his obvious talent for a certain kind of economic analysis (he revolutionized economic geography in the 1980s), I just know he has the ability to discern good arguments from bad. Yet, in Arguing with Zombies, he mixes them with wild abandon.