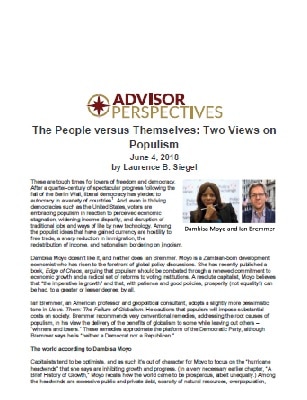 These are tough times for lovers of freedom and democracy. After a quarter-century of spectacular progress following the fall of the Berlin Wall, liberal democracy has yielded to autocracy in a variety of countries. And, even in thriving democracies such as the United States, voters are embracing populism in reaction to perceived economic stagnation, widening income disparity, and disruption of traditional jobs and ways of life by new technology. Among the populist ideas that have gained currency are hostility to free trade, a sharp reduction in immigration, the redistribution of income, and nationalism bordering on jingoism.

Dambisa Moyo doesn’t like it, and neither does Ian Bremmer. Moyo is a Zambian-born development economist who has risen to the forefront of global policy discussions. She has recently published a book, Edge of Chaos, arguing that populism should be combated through a renewed commitment to economic growth and a radical set of reforms to voting institutions. A resolute capitalist, Moyo believes that “the imperative is growth” and that, with patience and good policies, prosperity (not equality!) can be had, to a greater or lesser degree, by all.