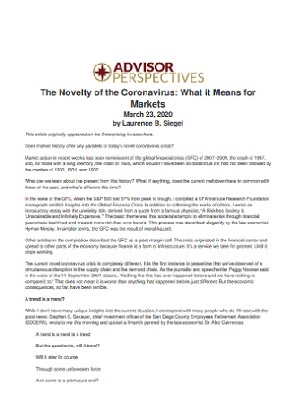 What can we learn about the present from this history? What, if anything, does the current meltdown have in common with those of the past, and what’s different this time?

In the wake of the GFC, when the S&P 500 lost 57% from peak to trough, I compiled a CFA Institute Research Foundation monograph entitled Insights into the Global Financial Crisis. In addition to collecting the works of others, I wrote an introductory essay with the unwieldy title, derived from a quote from a famous physicist, “A Riskless Society Is ‘Unattainable and Infinitely Expensive.’” The basic theme was that societal attempts to eliminate risk through financial guarantees backfired and created more risk than ever before. This process was described elegantly by the late economist Hyman Minsky. In simpler terms, the GFC was the result of moral hazard.