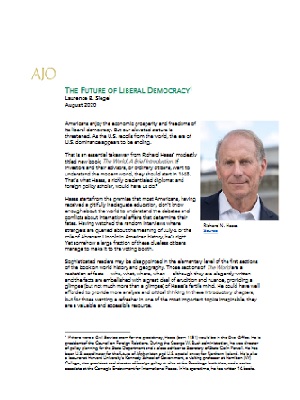 Americans enjoy the economic prosperity and freedoms of its liberal democracy. But our elevated stature is threatened. As the U.S. recoils from the world, the era of U.S. dominance appears to be ending.

That is an essential takeaway from Richard Haass’ modestly titled new book, The World: A Brief Introduction. If investors and their advisors, or ordinary citizens, want to understand the modern world, they should start in 1648. That’s what Haass, a richly credentialed diplomat and foreign policy scholar, would have us do.

Haass starts from the premise that most Americans, having received a pitifully inadequate education, don’t know enough about the world to understand the debates and conflicts about international affairs that determine their fates. Having watched the random interviews where strangers are queried about the meaning of July 4 or the role of Abraham Lincoln in American history, he’s right. Yet somehow a large fraction of these clueless citizens manage to make it to the voting booth.