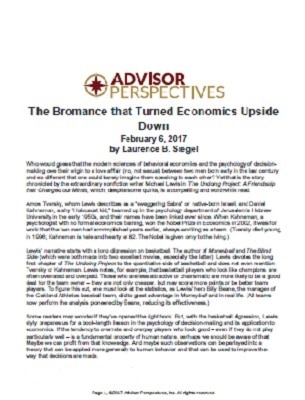 Who would guess that the modern sciences of behavioral economics and the psychology of decision-making owe their origin to a love affair (no, not sexual) between two men born early in the last century and so different that one could barely imagine them speaking to each other? Yet that is the story chronicled by the extraordinary nonfiction writer Michael Lewis in The Undoing Project: A Friendship that Changed our Minds, which, despite some quirks, is a compelling and worthwhile read.

Amos Tversky, whom Lewis describes as a “swaggering Sabra” or native-born Israeli, and Daniel Kahneman, a shy “Holocaust kid,” teamed up in the psychology department of Jerusalem’s Hebrew University in the early 1950s, and their names have been linked ever since. When Kahneman, a psychologist with no formal economics training, won the Nobel Prize in Economics in 2002, it was for work that the two men had accomplished years earlier, always working as a team. (Tversky died young, in 1996; Kahneman is hale and hearty at 82. The Nobel is given only to the living.)