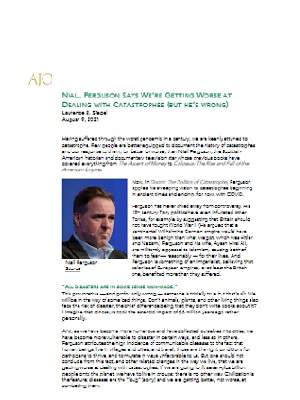 Having suffered through the worst pandemic in a century, we are keenly attuned to catastrophe. Few people are better equipped to document the history of catastrophes and our response to them, for better or worse, than Niall Ferguson, the Scottish-American historian and documentary television star whose previous books have covered everything from The Ascent of Money to Colossus: The Rise and Fall of the American Empire.

Now, in Doom: The Politics of Catastrophe, Ferguson applies his sweeping vision to catastrophes beginning in ancient times and ending, for now, with COVID.

Ferguson has never shied away from controversy. His 19th century Tory politics have even infuriated other Tories, for example by suggesting that Britain should not have fought World War I. (He argued that a continental Wilhelmine German empire would have been more benign than what we got, which was Hitler and Nazism.) Ferguson and his wife, Ayaan Hirsi Ali, are militantly opposed to Islamism, causing both of them to fear — reasonably — for their lives. And Ferguson is something of an imperialist, believing that colonies of European empires, or at least the British one, benefited more than they suffered.