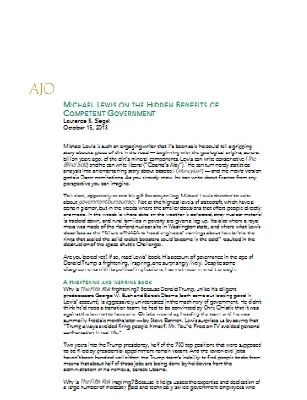 Michael Lewis is such an engaging writer that it’s been said he could tell a gripping story about a piece of dirt in the road — beginning with the geological origins, several billion years ago, of the dirt’s mineral components. Lewis can write conservative (The Blind Side) and he can write liberal (“Obama’s Way”). He can turn nerdy statistical analysis into an entertaining story about baseball (Moneyball) — and the movie version got six Oscar nominations. As you already know, he can write about finance from any perspective you can imagine.

This time, apparently to test his gift for storytelling, Michael Lewis decided to write about government bureaucracy. Not at the highest levels of statecraft, which have a certain glamor, but in the weeds where the smaller decisions that affect people directly are made. In the weeds is where data on the weather is collected, stray nuclear material is tracked down, and rural families in poverty are given a leg up. It’s also where a royal mess was made of the Hanford nuclear site in Washington state, and where what Lewis describes as the “failure of NASA to heed engineers’ warnings about how brittle the rings that sealed the solid rocket boosters could become in the cold” resulted in the destruction of the space shuttle Challenger.