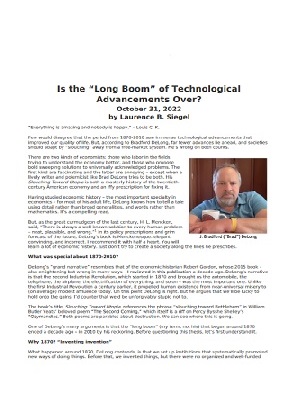 Few would disagree that the period from 1870-2010 saw immense technological advancements that improved our quality of life. But, according to Bradford DeLong, far fewer advances lie ahead, and societies should adapt by “slouching” away from a free-market system. He’s wrong on both counts.

There are two kinds of economists: those who labor in the fields trying to understand the economy better, and those who propose bold sweeping solutions to universally acknowledged problems. The first kind are fascinating and the latter are annoying – except when a lively writer and polemicist like Brad DeLong tries to be both. His Slouching Toward Utopia is both a masterly history of the twentieth-century American economy and an iffy prescription for fixing it.

Having studied economic history – the most important specialty in economics – for most of his adult life, DeLong knows how to tell a tale using detail rather than broad generalities, and words rather than mathematics. It’s a compelling read.

But, as the great curmudgeon of the last century, H. L. Mencken, said, “There is always a well-known solution to every human problem – neat, plausible, and wrong.” In its policy prescriptions and grim forecast of the future, DeLong’s book is Menckenesque: elegant, convincing, and incorrect. I recommend it with half a heart. You will learn a lot of economic history. Just don’t try to create a society along the lines he prescribes.