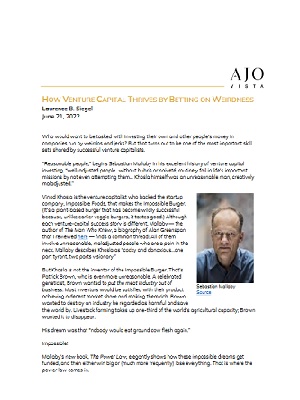 Who would want to be tasked with investing their own and other people’s money in companies run by weirdos and jerks? But that turns out to be one of the most important skill sets shared by successful venture capitalists.

“Reasonable people,” begins Sebastian Mallaby in his excellent history of venture capital investing, “well-adjusted people…without hubris or naïveté, routinely fail in life’s important missions by not even attempting them… Khosla himself was an unreasonable man, creatively maladjusted.”

Vinod Khosla is the venture capitalist who backed the startup company, Impossible Foods, that makes the Impossible Burger. (It’s a plant-based burger that has become wildly successful because, unlike earlier veggie burgers, it tastes good.) Although each venture-capital success story is different, Mallaby — the author of The Man Who Knew, a biography of Alan Greenspan that I reviewed here — finds a common thread: All of them involve unreasonable, maladjusted people who are a pain in the neck. Mallaby describes Khosla as “cocky and obnoxious…one part tyrant, two parts visionary.”