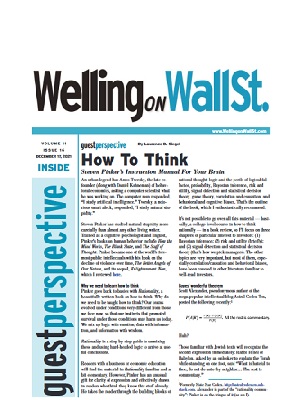 An urban legend has Amos Tversky, the late cofounder (along with Daniel Kahneman) of behavioral economics, asking a computer scientist what he was working on. The computer man responded, “I study artificial intelligence.” Tversky, a notorious smart aleck, responded, “I study natural stupidity.”

Steven Pinker has studied natural stupidity more carefully than almost any other living writer. Trained as a cognitive psychologist and linguist, Pinker’s books on human behavior include How the Mind Works, The Blank Slate, and The Stuff of Thought. Pinker became one of the world’s foremost public intellectuals with his book on the decline of violence over time, The Better Angels of Our Nature, and its sequel, Enlightenment Now, which I reviewed here.