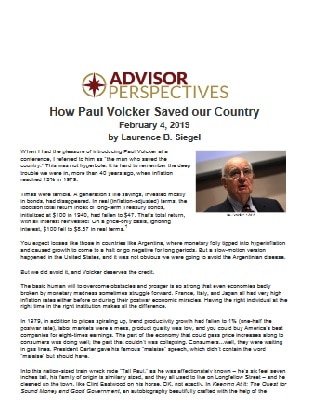 When I had the pleasure of introducing Paul Volcker at a conference, I referred to him as “the man who saved the country.” This was not hyperbole. It is hard to remember the deep trouble we were in, more than 40 years ago, when inflation reached 13% in 1979.

Times were terrible. A generation’s life savings, invested mostly in bonds, had disappeared. In real (inflation-adjusted) terms, the Ibbotson total return index of long-term Treasury bonds,initialized at $100 in 1940, had fallen to $47. That’s total return,with all interest reinvested! On a price-only basis, ignoring interest, $100 fell to $8.57 in real terms.

You expect losses like those in countries like Argentina, where monetary folly tipped into hyperinflation and caused growth to come to a halt or go negative for long periods. But a slow-motion version happened in the United States, and it was not obvious we were going to avoid the Argentinian disease.