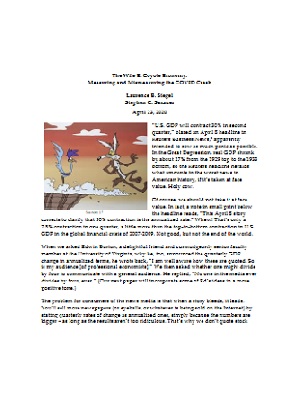 “U.S. GDP will contract 30% in second quarter,” blared an April 8 headline in Reuters Business News, apparently intended to sow as much panic as possible. In the Great Depression, real GDP shrank by about 27% from the 1929 top to the 1933 bottom, so the Reuters headline heralds what amounts to the worst news in American history, if it’s taken at face value. Holy cow.

Of course, we should not take it at face value. In fact, a note in small print below the headline reads, “This April 8 story corrects to clarify that 30% contraction is the annualized rate.” Whew! That’s only a 7.5% contraction in one quarter, a little more than the top-to-bottom contraction in U.S. GDP in the global financial crisis of 2007-2009. Not good, but not the end of the world.