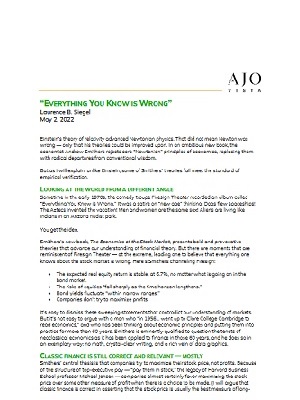 Einstein’s theory of relativity advanced Newtonian physics. That did not mean Newton was wrong — only that his theories could be improved upon. In an ambitious new book, the economist Andrew Smithers rejects core “Newtonian” principles of economics, replacing them with radical departures from conventional wisdom.

But as I will explain, unlike Einstein, some of Smithers’ theories fail meet the standard of empirical verification.

LOOKING AT THE WORLD FROM A DIFFERENT ANGLE
Sometime in the early 1970s, the comedy troupe Firesign Theater recorded an album called “Everything You Know is Wrong.” It was a satire on “new age” thinking: Dogs flew spaceships! The Aztecs invented the vacation! Men and women are the same sex! Aliens are living like Indians in an Arizona nudist park.

You get the idea.