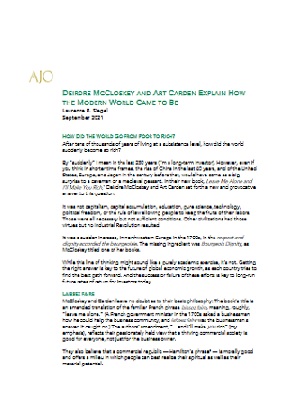 How Did the World Go from Poor to Rich?

After tens of thousands of years of living at a subsistence level, how did the world suddenly become so rich?

By “suddenly” I mean in the last 250 years (I’m a long-term investor). However, even if you think in shorter time frames, the rise of China in the last 40 years, and of the United States, Europe, and Japan in the century before that, would have come as a big surprise to a caveman or a medieval peasant. In their new book, Leave Me Alone and I’ll Make You Rich, Deirdre McCloskey and Art Carden set forth a new and provocative answer to this question.

It was not capitalism, capital accumulation, education, pure science, technology, political freedom, or the rule of law allowing people to keep the fruits of their labors. Those were all necessary but not sufficient conditions. Other civilizations had those virtues but no Industrial Revolution resulted.

It was a sudden increase, in northwestern Europe in the 1700s, in the respect and dignity accorded the bourgeoisie. The missing ingredient was Bourgeois Dignity, as McCloskey titled one of her books.