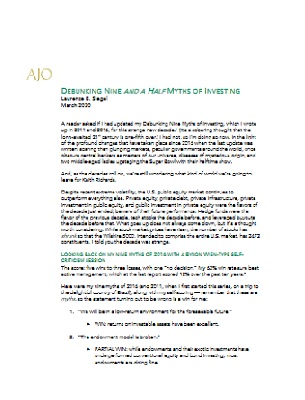 A reader asked if I had updated my Debunking Nine Myths of Investing, which I wrote up in 2011 and 2016, for this strange new decade. (It’s a sobering thought that the long-awaited 21st century is one-fifth over.) I had not, so I’m doing so now, in the light of the profound changes that have taken place since 2016 when the last update was written: soaring then plunging markets, peculiar governments around the world, once obscure central bankers as masters of our universe, diseases of mysterious origin, and two middle-aged ladies upstaging the Super Bowl with their halftime show.

And, as the decades roll on, we’re still wondering what kind of world we’re going to leave for Keith Richards.

Despite recent extreme volatility, the U.S. public equity market continues to outperform everything else. Private equity, private debt, private infrastructure, private investment in public equity, and public investment in private equity were the flavors of the decade just ended; beware of their future performance. Hedge funds were the flavor of the previous decade, tech stocks the decade before, and leveraged buyouts the decade before that. What goes up does not always come down, but it’s a thought worth considering. While stock market prices have risen, the number of stocks has shrunk so that the Wilshire 5000, intended to comprise the entire U.S. market, has 3473 constituents. I told you the decade was strange.