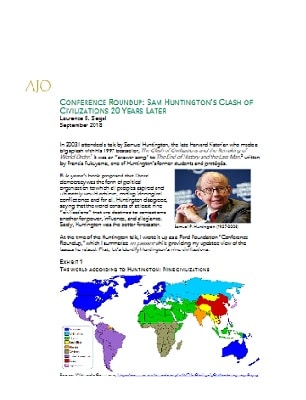 In 2003 I attended a talk by Samuel Huntington, the late Harvard historian who made a big splash with his 1997 bestseller, The Clash of Civilizations and the Remaking of World Order. It was an “answer song” to The End of History and the Last Man, written by Francis Fukuyama, one of Huntington’s former students and protégés.

Fukuyama’s book proposed that liberal democracy was the form of political organization to which all peoples aspired and ultimately would achieve, ending ideological conflict once and for all. Huntington disagreed, saying that the world consists of at least nine “civilizations” that are destined to contest one another for power, influence, and allegiance. Sadly, Huntington was the better forecaster.