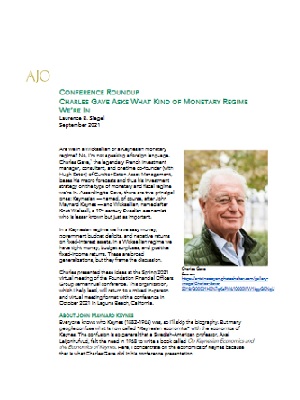 Are we in a Wicksellian or a Keynesian monetary regime? No, I’m not speaking a foreign language. Charles Gave, the legendary French investment manager, consultant, and onetime co-founder (with Hugh Eaton) of Cursitor-Eaton Asset Management, bases his macro forecasts and thus his investment strategy on the type of monetary and fiscal regime we’re in. According to Gave, there are two principal ones: Keynesian — named, of course, after John Maynard Keynes — and Wicksellian, named after Knut Wicksell, a 19th century Swedish economist who is lesser known but just as important.

In a Keynesian regime we have easy money, government budget deficits, and negative returns on fixed-interest assets. In a Wicksellian regime we have tight money, budget surpluses, and positive fixed-income returns. These are broad generalizations, but they frame the discussion.

Charles presented these ideas at the Spring 2021 virtual meeting of the Foundation Financial Officers Group semiannual conference. This organization, which I help lead, will return to a mixed in-person and virtual meeting format with a conference in October 2021 in Laguna Beach, California.