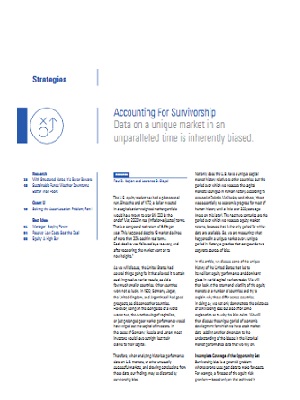 The U.S. equity market has had a phenomenal run. Since the end of 1870, a dollar invested in a capitalization-weighted market portfolio would have grown to over $18,000 by the end of May 2020 in real (inflation-adjusted) terms. That’s a compound real return of 6.8% per year. This happened despite 18 market declines of more than 20% each in real terms. Each decline was followed by a recovery, and after recovering, the market went on to new heights.

As we will discuss, the United States had several things going for it that allowed it to attain such impressive market results, as did a few much smaller countries. Other countries were not as lucky. In 1900, Germany, Japan, the United Kingdom, and Argentina all had good prospects, as did some other countries. However, being on the losing side of a world war or two, the overthrowing of capitalism, or just prolonged poor market performance would have wiped out the capital of investors. In the cases of Germany, Russia, and Japan, most investors would have outright lost their claims to their capital.

Therefore, when analyzing historical performance data on U.S. markets, or other unusually successful markets, and drawing conclusions from those data, our findings may be distorted by survivorship bias.